The new robotic water-cooled guns are available in a variety of amperages ranging from 350 to 600 amps at 100 percent duty cycle. Designed with a dedicated gas line that runs from the back of the guns directly to the gas diffuser, the guns deliver cost savings since shielding gas has zero opportunity to escape.

The guns also use a unique dual-circuit cooling system that runs the length of the front end, providing more effective cooling and lower operating temperatures. This feature results in longer MIG gun and consumable life, as well as less downtime for consumable changeover. Cooler operating temperatures also reduce the amount of spatter that adheres to the nozzle, saving time and money in cleanup, extending nozzle life and lowering overall consumable costs.

CWD and TWD Robotic Water-Cooled MIG Guns are available in clutch and solid mount models, with a variety of mounting arm and neck options to achieve Tool Center Point (TCP). They also include integrated air blast and a simple liner design, with one end pre-dressed at the factory to minimize the opportunity for operator variation in liner trimming.

Precision engineered with a special alloy that provides a higher resistance to wear and arc erosion, the TOUGH LOCK HDP contact tips allow operations to regain as much as 95 percent of the productivity lost during typical contact tip changeovers. TOUGH LOCK HDP contact tips can do so by lasting six to 10 times longer than copper and chrome zirconium tips, which often need to be replaced twice as frequently during pulsed MIG welding due to its high heat input. The new contact tips also feature a tight bore tolerance, provide increased arc stability to improve weld quality and reduce spatter, along with its associated cleanup.

TOUGH LOCK HDP contact tips are available in packages of 5, 25 or 100 and can be used with .035-, .040- and .045-inch solid copper-coated wires. They are compatible with TOUGH LOCK Consumables, including nozzles and retaining heads, and require no change to Tool Center Point (TCP). The contact tips also benefit from compatibility with the TOUGH GUN reamer robotic nozzle cleaning station, which helps extend the life of robotic MIG guns and consumables by automatically removing spatter. 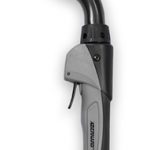 All Clean Air fume extraction guns have a small vacuum chamber that provides good joint access and visibility, along with a 360-degree vacuum hose swivel on the rear of the handle that improves flexibility and reduces operator wrist fatigue. The guns are ideal for large weldment and confined space welding applications.

BEECHER, Ill. August 14, 2017 – Bernard and Tregaskiss will showcase its welding guns and consumables at FABTECH 2017 in Chicago, November 6 to 9, along with providing a variety of demonstrations. Both companies will share booth B23034 with Miller Electric Mfg. Co. and Hobart, where they will feature live welding demonstrations of Bernard semi-automatic and Tregaskiss robotic MIG guns with Miller power sources and robotic welding equipment using Hobart filler metals — offering visitors the chance to try a complete welding solution from the brands. In addition, representatives will provide demonstrations on how to repair, maintain and install option changes to the Bernard BTB semi-automatic air-cooled MIG guns, to illustrate the ease of maintenance or modification.

The company plans to feature new products designed to improve quality, productivity and cost savings, and will have representatives available to answer product and technology questions.

WINDSOR, Ontario. June 5, 2017 — Tregaskiss announced the company is celebrating its 50th anniversary. Founded in 1967 by William Tregaskiss, a toolmaker from England,

the company introduced its first semi-automatic MIG gun in 1972 to address the demanding welding needs of the automotive industry. Since then, the company has introduced the well-known TOUGH GUN® and TOUGH LOCK® brands, and today is known as an industry leader in the manufacturing of robotic MIG guns, peripherals and consumables.

“We’re excited about this milestone and thankful to the people who have made our company what it is today,” says Diana Schneider, vice president/general manager, Tregaskiss. “From our dedicated employees who work hard to develop the best possible products to our customers and channel partners who continue to support us, everyone is critical to our success — we value these relationships.”

Tregaskiss was family owned and operated until it was purchased by Illinois Tool Works (ITW) in 2007.